After the installation of the LRGS software there are a few tasks that need to be completed to begin the operation of the software. All of these tasks are covered in detail in the User Manual.

After installation, you should set a few environment variables:
On Unix/Linux systems, you can set these variables in the login startup scripts for user ‘lrgs’.

On Windows machines, you can set environment variables through the System control panel.
The path to this dialogue is: Start->Control Panel->System->Advanced Tab->Environmental Variables. The screen looks like this in Windows XP: 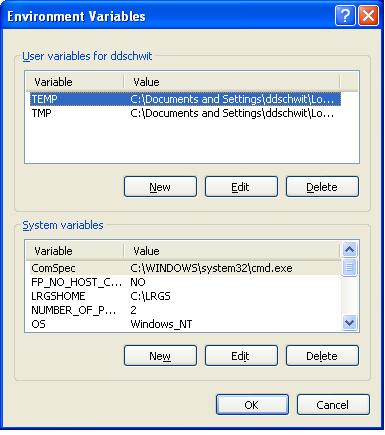 All users require a ‘sandbox’ directory where temporary files are stored. These are sub-directories under the directory $LRGSHOME/users. So, for example, to create a user with name ‘groucho’, issue the following commands:

LRGS stores passwords in a secure file called ‘.lrgs.passwd’ in the $LRGSHOME directory. This file stores user names, roles, and a hash of the password. You should keep this file hidden so that only you can modify it.

On a Linux or Unix system, create the file as follows:

On a Windows system, create the file as follows:

Now run the utility for adding, removing, and modifying LRGS administrative users. A simple commandline utility called ‘editPasswd’ (for Edit LRGS Passwords) has been supplied for this. Start the utility by typing:

Type ‘help’ and hit ENTER for a list of supported commands. For example, to add a user named ‘groucho’ with both DDS and Administrative privileges, type:

Currently the following roles are recognized:

We have provided three sample configuration files in the installation for you to use. They are located in the $LRGSHOME directory.

To use these files unmodified, on a Windows system, execute these commands:

On Linux or Unix:

Chapter 5 of the Users Manual explains each of these files in detail. The samples are appropriate for a simple DOMSAT system that gets backup from Wallops. Modify the files for the settings appropriate to you.