The United States of America currently operates Geostationary Operational Environmental Satellites (GOES) that are an integrated system of Earth and space environmental sensors which provide nearly continuous observational information to ground-based user stations. The GOES system is operated and controlled by the National Environmental Satellite, Data, and Information Service (NESDIS) of the National Oceanic and Atmospheric Administration (NOAA) of the U.S. Department of Commerce. The system was developed by NESDIS in conjunction with the National Aeronautics and Space Administration (NASA) and based upon the results of earlier experiments with the NASA Advanced Technology Satellites. The GOES system consists of several observing subsystems including the data collection system (DCS). The DCS uses the GOES spacecraft for the relay of data from remotely located insitu sites at or near the Earth's surface. 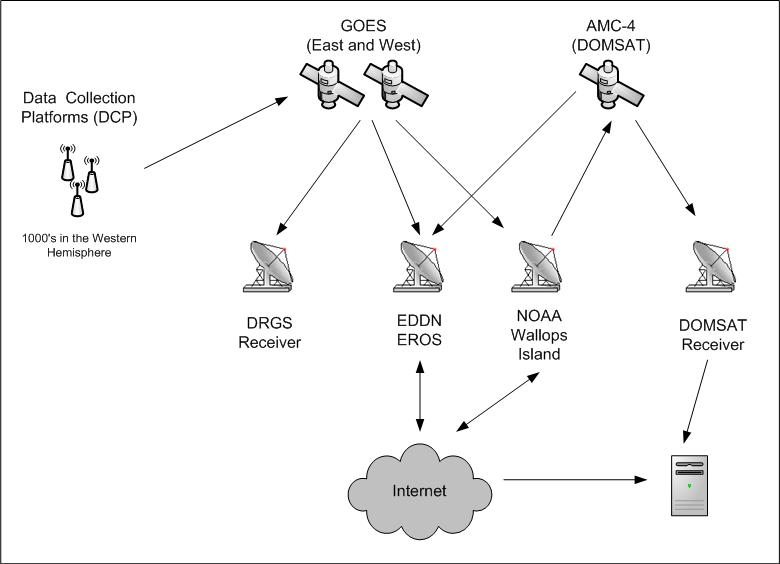 The National Environmental Satellite, Data, and Information Service (NESDIS) operates the U.S. Geostationary Operational Environmental Satellite (GOES) system. The GOES system's primary mission is to continuously observe changing weather phenomena from satellite-based sensors situated approximately 23,000 miles from Earth. As a collateral duty, the GOES system supports a radio relay or Data Collection System (DCS). The DCS enables a large variety of environmental data to be relayed from point sources through GOES and back to Earth, from where these data are disseminated to the various system users. These point sources are called Data Collection Platforms (DCP), and can be are land, sea or mobile-based.

Data is transmitted from over 20,000 DCPs throughout the western hemisphere (More Information). Each platform is equipped with a recorder, power source, transmitter, antenna, and an array of environmental sensors. Each DCP is programmed to collect sensor data and then transmit it in a message during specified time-slots on specified GOES channels.

Users with a GOES DRGS (Direct Readout Ground Station) can receive the DCP messages directly from GOES. For other users, NOAA provides other services through the DCS Automated Processing System (DAPS). DAPS is a large dual-computer based system located at the NOAA Command and Data Acquisition (CDA) facility in Wallops, Virginia (More Information). It continually monitors all GOES RF channels for incoming DCP messages. DAPS can support the receipt and archival of messages from up to 100,000 platforms, redistributing them to up to 5,000 users.

DAPS supports the distribution of DCP messages to the user-organizations via a domestic communications satellite (DOMSAT). DAPS continuously broadcasts all incoming DCP messages over DOMSAT using a single high-speed channel. Thus for a fraction of the cost of a DRGS, users can receive the entire DCS data stream via DOMSAT.

In 2004, NOAA started a new service called LRIT (Low Rate Information Transfer). This service combines low resolution WEFAX images and all DCS data. It operates on a separate frequency on both GOES East and West Satellites. Finally, the NOAAPORT data stream is similar to DOMSAT in that it operates on a separate domestic satellite. It differs from DOMSAT in the following ways: